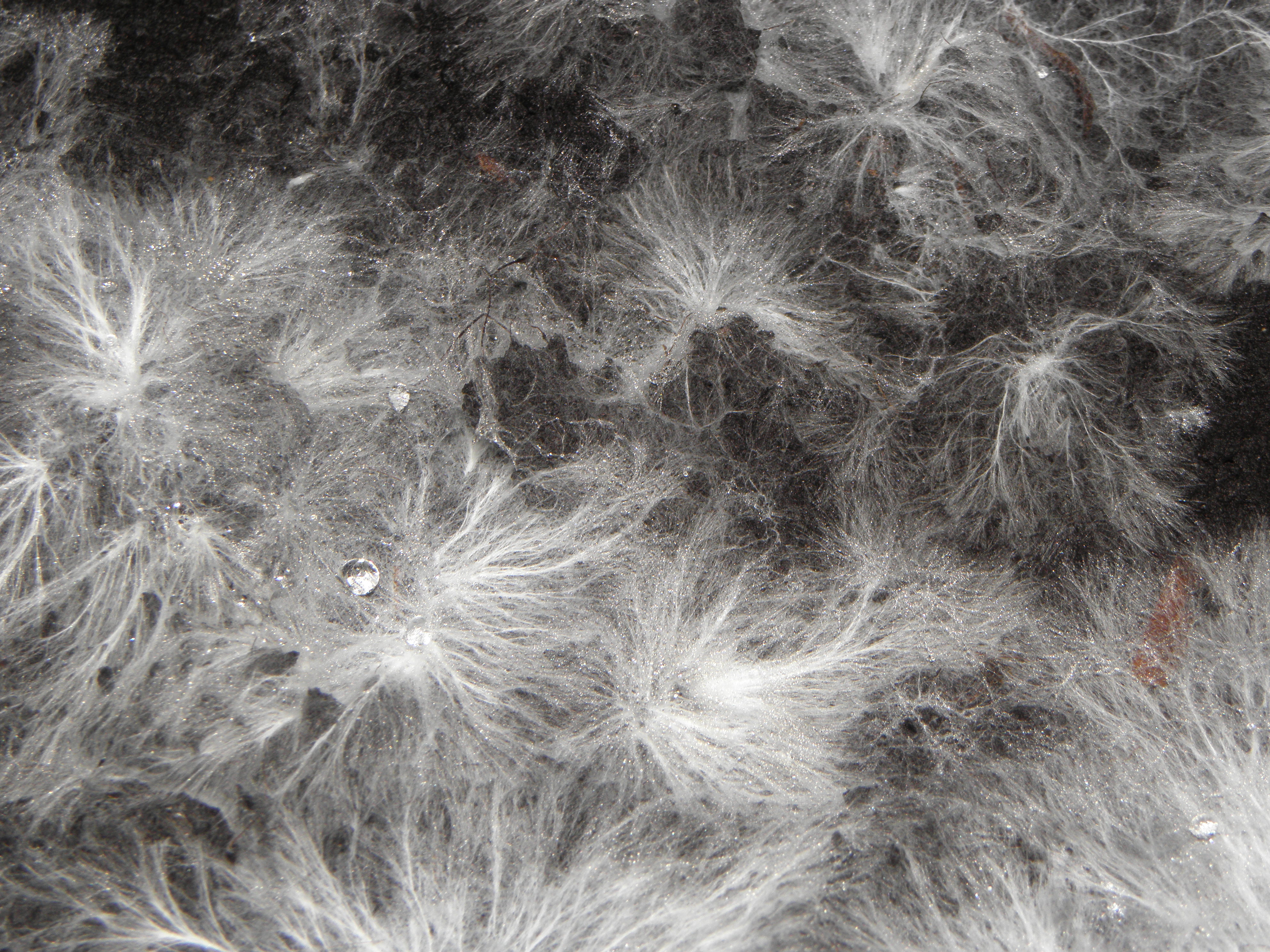 How fungi establish and maintain a dynamic mycelial colony

This post was originally posted as my first guest post on the Biomed Central Blog Network On Biology!

It all begins with a few spores settling down on a nutritious surface. When spores wake up in close proximity to one another they start germinating at approximately the same time and grow outwards at a similar rate. Here’s a question a fungal biologist would ask: How do these spores know that there is others around and that they are preparing to germinate? Think about this for a moment, this creature has neither eyes nor ears, and yet it is aware that something else is around. What’s more, it knows whether that something is itself or not. “Itself” can be spores or germlings with the exact same genetic set-up.

Scientists from the UK and Germany suggest that germlings of the fungus Neurospora crassa sense the presence of others by a signalling molecule. Receiving the signal triggers an internal signalling cascade in the germling that leads to specific proteins localizing to the site of initial signal reception – the germling starts extending towards the other. During that process, it sends out the same signal. The two befriending germlings take turns in sending and receiving the signal and extending towards each other. They keep repeating this until they physically touch, which initiates a fusion process. Once fused, the germlings are able to exchange cellular information and organelles. Check out how cool this looks under the microscope here (very kindly provided by Antonio Serrano, see also reference list for his paper)!

Self-recognition and fusion also work between two branches of different hypha within the same colony allowing an even more intricate networking. However, this has not been observed in all fungi. Yet, considering the orderly, sometimes almost symmetrical growth of the mycelium, it seems self-evident that the different branches keep the lines of communication open at all times.

Despite the sometimes seemingly uniformity of a fungal colony different areas may feature different developmental structures. For example, a colony of Aspergillus nidulans tends to initiate sexual development at its centre, produces asexual spores in the sub-periphery and simply extends at the periphery. How is this possible? Studies in a fungus producing black spores, Aspergillus niger, show that heterogeneity of a colony is established and maintained by cellular barriers. Although the mycelial network is one organism, it’s not one cell – but many. These hyphal cells are separated by cross walls called septa. Septa contain pores that can be opened or closed to either allow or prevent passage of cytoplasmic content. Dutch scientists found that in an A. niger colony the majority of these cross walls is normally closed (up to 100% in the sub-periphery, 40-50% in the periphery). This mechanism allows individual hyphal cells to shuffle around their proteins, signalling molecules and internal transport pathways independently of their neighbours. 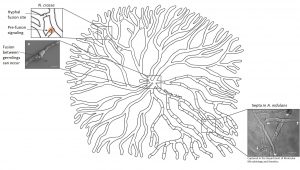 Septation of hyphal cells establishes and maintains heterogeneity in fungi such as A. niger and A. nidulans.

And yet, all cells are still supplied with an important nutrient – glucose. One study demonstrated that glucose is transported through the mycelial network even when septa are closed. The scientists speculate that glucose crosses the closed septum with the help of a transporter. They also discovered that particularly wide hyphae carry a great proportion of the total glucose and transport it over long distances like glucose highways. 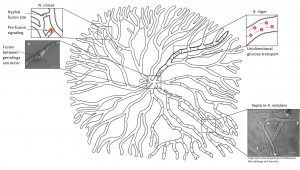 A great proportion of glucose is transported in wide hyphae in A. niger (bold hypha). These “glucose highways” transport the much needed carbon source over long distances in a unidirectional manner (arrows).

Working together – the fungal colony as a dynamic and adaptive network

Scientists from the UK and their co-workers take this network research to yet another level. They feed experimental data of fungal growth into computer models to shed a light on the dynamic fluxes of signals and nutrients over time. This allows them to visualize the responses of a colony to environmental changes or predator attack. In one of their studies, they allowed a fungus called Phanerochaete velutina to grow for a few weeks before adding natural predators to the colony. While the springtails munched their way through the mycelium, the fungus responded to the attack by re-allocating nutrients to injured parts and rebuilding lost connections and branches. For that purpose, the colony even sacrificed unused hyphae to be able to fortify important routes. Intriguingly, the colony also prepared itself for future attacks to become more resilient. 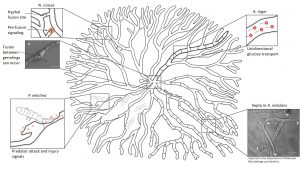 When parts of the mycelium are injured or destroyed, as in Phanerochaete velutina, the colony re-allocates nutrients and rebuilds lost connections.

The way a fungal network develops and evolves may also teach us something about how to optimize some of our own networks. In collaboration with Japanese colleagues, the scientists demonstrated that a slime mould** recreates the Tokyo railway system when presented with blocks of nutrients mirroring locations of actual traffic nodes. Besides finding the shortest way to the next food source, the mould reinforced preferred routes while reducing redundant paths. The mould didn’t just build a network for efficient transport in the current situation but established a tolerance to failure – an “intrinsic resilience” that allows the network to adapt to unexpected impediments without breaking down. Check out what that looks like here or here.

Studies like this one illustrate that a fungal colony is not just growing and getting older waiting to be eaten. It perceives and processes nutritional changes or mycelial injuries and responds to that by adaptation. To do this, it has to work as an entity. The scientists from the UK argue that the fungal colony is a network organism we have yet to fully acknowledge as such!

** Technically, slime moulds are not fungi, even though they were regarded as such when first described.

Want to read more on the fungal colony?

Research papers I read and recommend for further reading:

Heterogeneity in A. niger:

I would like to thank Corrado Nai, Vera Meyer and Alexander Idnurm for their valuable feedback and editing on the original blog post! 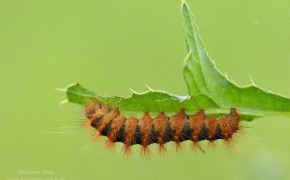